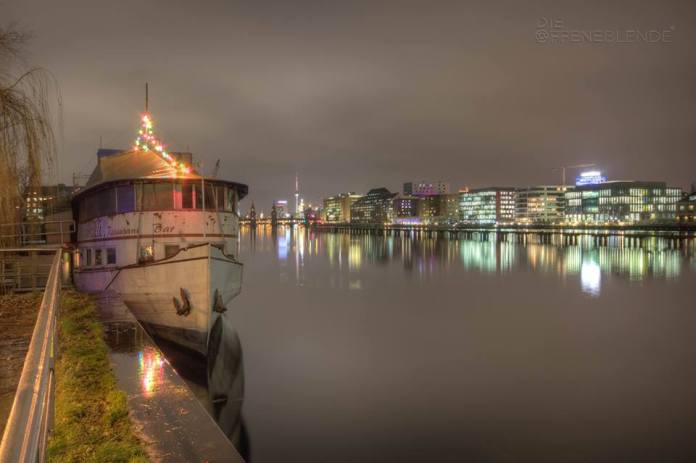 Maintaining their rightful place as one of the most important venues in Berlin to hear the best in minimal music Hoppetosse has programmed a ridiculous selection of parties over the next weeks. Starting strong on Friday, January 31st Perfect Friday will feature 3 downright heavyweights in Ion Ludwig who will perform live, Romanian Petre Inspirescu and Thomas Melchior.

We are not sure how Hoppetosse could possibly top this party but the very next night on Saturday, February 1st where Berlin’s beat boat will play host to an always on-point showcase from the Slow Life crew. Taking up their rightful place in the main room will be label stars Primary Perception who will as always blur the lines between machine and human, SIMI. And the incendiary triple threat team of Laurine, Cecilio and Dj Tree. Meanwhile, if you need a break from the main room action the chill out room will soothe your soul with sounds from Melina Serser, Ethereal Logic and Nindya Nareswari who will provide the visuals.

Meander and Amphia continue their theme of joint Sunday parties with the first record being dropped at around 10pm on Sunday, February 2nd and the last record playing out around 9am on Monday, February 3rd. Making waves aboard MS Hoppetosse will be Christopher Ledger, Cristi Cons, DeWalta and Vlad Caia. With each of the artist constantly having a steady stream of never heard before material and demo’s passing through their studio there is little doubt that minds will be blown with each new track being brought in.

Moving to Hoppetosse from Panorama Bar Get Perlonized will, as always, be bringing a downright insane array of Perlon artists on Friday, February 7th. Topping the bill is the duo of Markus Nikolai and Chris Rehberger who will be performing under the guise of their live outfit Darren. Also on the bill will be Maayan Nidam, San Proper, The Mole and Zip.

Next is the annual hook-up between Melliflow and Closer Kiev which will take place on Saturday, February 8th. Winter Trip 4 and the 3 that have gone before them always draw the best in minimal from both camps and it is unfathomable the amount of musical talent and experience that these artists command. Taking care of business in the main room will be Alexandra, Cedric Dekowski, Christian AB, Desyn, Gwenan Spearing b2b Andrew James Gustav, Kozo, KRN, Lobanov K live, SE62, Vera, and Vova KLK. While in the chill-out room the sounds will be provided by Dasha Redkina, Evano, The Apricots, Koji Yone-ko Yonezu plus more names are still to be announced.

With Valentines Day Round the Corner the Zurich based label and party series will be pitching up to the Berlin water-based nightspot on Saturday, February 15th. There you will find a huge cast of selectors waiting for you to fall in love with them all over again. Making up the cast for the evening will be SEPP, Cesar Merveille, Jonn, Matheiu, BioN, Donna K and And.re.

A new concept coming to Hoppetosse from UK techno figurehead Dean Marc, Unknown djs Berlin 001 on Sunday, February 16th is designed to collect together and present new names to the scene while maintaining a high level of quality with a big-hitting guest. The assembled names for the maiden event will be SUNRISE artist COSMJN and he will be supported by Remelie, Alexander Kraemer and Daniela Cast.

Moving on a week Hoppetosse gears up for yet another no-stop party that kicks off on Friday, February 21st with longstanding party pals Love Letters From Oslo and their 12-hour marathon shindig. The party has been running at Hoppetosse and Club der Visionaere for as long as we can remember and when they bring with them artists such as Cape, Gulp, Lee Burton, Nekes and label head Federico Molinari there is little wonder it is still running and still very much loved by all that frequent the club.

The Ghost and their parties have become legendary and their yearly February event is the pinnacle of this legend. Ghost Party – Club Tropicana on Saturday, February 22nd chooses to buck the trend of muted colors with the decidedly upbeat and bright ethos in music and will feature an extended set from Truly Madly, DJ Pipe and of course the resident party starters The Ghost. Bright shirts inflatable parrots on standby.

Completing this weekend of debauchery in true Hoppetosse style is NoPressure on Sunday, February 23rd providing the soundtrack to yet another lost weekend will be regulars Clovis, Ema Remedi, and the Detroit pairing of Ryan Crosson and Shaun Reeves.

The following weekend is just as huge (a bit of a trend forming here we know) and begins by featuring a showcase from Subtil at Hoppetosse. Starting on Friday, February 28th the boat will be getting rocked by the minimal yet soulful sounds of VincentIulian, Pîrvu, Martin Glowacz, and Nils Weimann.

Rounding out a simply sizzling month out on the Hoppetosse boat is a night spent with the Lize Records crew and the Lize Night on Saturday, February 29th will again bring together a fine selection of artists for one hell of a party. Heading up this edition will be Pager Records and Robert Johnson resident Markus Sommer, he will be joined by Mayell, Tom Ransom and Lize Records owner Patrick Poitz.

Leading Berlin into a March and ending yet another non-stop weekend at Hoppetosse is the Playground party on Sunday, March 1st. Featuring the Apollonia pair of Dyed Soundorom and Shonky the Frenchmen will be joined by Italian selector extraordinaire Quest and Madrid femme fatale Sugar Free.

Officially taking us into the first weekend of March and with the countdown to Spring firmly on it is the return of the Reciproc Weekender. Starting at just before midnight on Saturday, March 7th the Romanian booking agency will be presenting an extended journey into their roster and affiliated artists. Taking to the decks across the event will be ALCI, Alex Troubetzkoy, atree, Ben Balance, David Nicolas, Dan Ghenacia, Fabe, Ferro, Mandana, Orli, Reiss, Sweely (live), Yamen & EDA (live) and even more artists are yet to be added to this monstrous party.

If you still have some in the tank after that last party then Seekers will be throwing a party to celebrate their 5-year anniversary on Friday, March 20th. There are no details yet on who will be playing at this event but believe us you do not want to miss it.

Firmly seeing Berlin out of the gloomy and cold winter months will see the joint Rotate x Aeternum party on Friday, March 27th and it’s a biggie. Taking control of the main room will be Denis Kaznacheev, Giuliano Lomonte, Legri, Lowris, Peter F. Spiess and Tom Ellis. Meanwhile down in the chill area, your cerebrum is in good hands with Jonas and Nies.

In essence, you have to try really hard to find a bad event at any point at Hoppetosse and this exemplifies exactly why this floating haven and its associated sibling Club der Visionaere are so highly respected and prized. So, if you happen to be in Berlin over the next few months you have the chance to catch some of our scenes most exciting artists in action not to mention experience one of the world’s most special venues I full flow.

MAD Radio celebrate their 2nd birthday by inviting Seekers for a label...